Tent making is an essential aspect of Tibetan nomadic life. It provides not only a dwelling place for the family and relatives, but also functions as a social and cultural lubricant in the community. In a nomadic community, tent making reflects family ties, community relations, and social reciprocity that maintain social and cultural continuity.

Tent making itself is a long, laborious process that starts with the availability of yaks. Traditional nomadic tents are made entirely of yak hair, except for the beams and interior poles that hold the tent up from inside and the pegs and supporting poles that tie it down on the outside.

Yak hair is normally sheared midway through the spring season when it is thickest and the yak’s need for thick hair is less important due to the coming warmer weather. Depending on the number of yaks a family owns, close relatives and/or clan members often come to the aid of one another to help shearing. The families may take turns, shearing all the yaks within a few days or a couple of weeks.

First they must catch the yaks, often with a lasso, and then tie each one down with their legs tied together and head and horns pushed toward the ground. Shearing a yak, often with scissors, requires three or four adults. Some yaks, especially the females that are milked and have consistent close contact with people, do not need to be tied down. 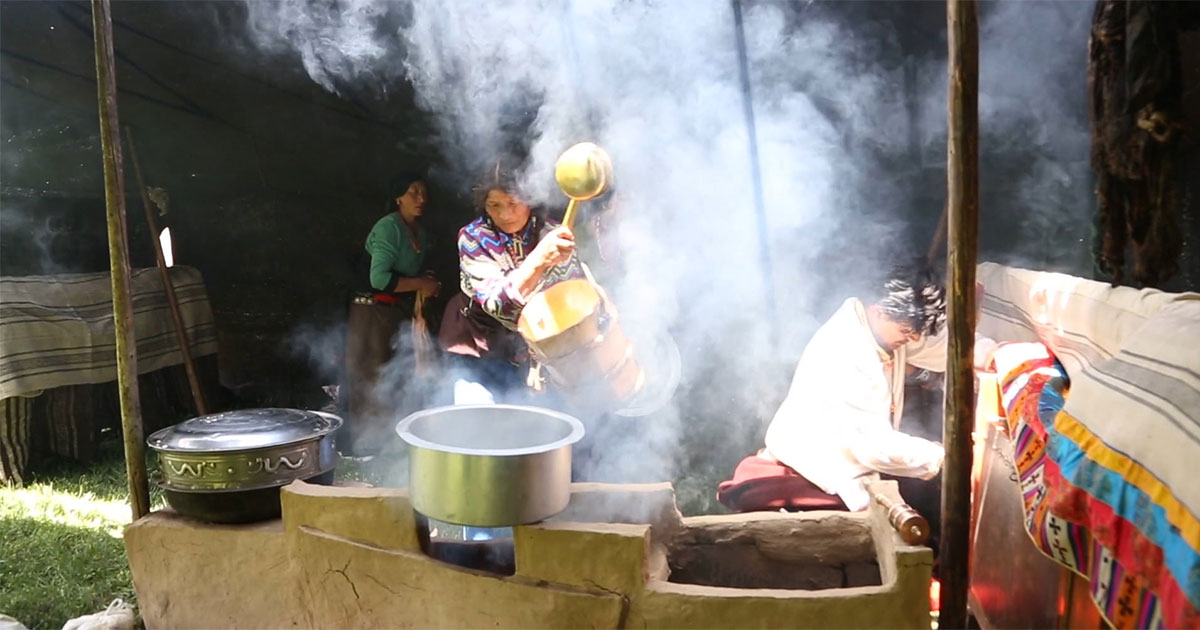 After the sheared yak hair is collected in sacks, it has to be washed and dried, then separated into fine and long, coarse fibers. Once separated, it’s time to spin the hair into yarn—another long process that requires many people and good, rainless days. Traditionally, one person turns the spinning loom while two to four women spin the yarn attached to the loom, sometimes spreading across a field of several hundred yards. In most communities, such detailed labor is primarily carried out by female members.

When a family accumulates enough yarn for a tent, which often takes years, the next process is the arduous labor of weaving. Alternatively, a family might weave the yarn into strips of tent cloth during the summer and fall seasons until they have a sufficient amount for a tent. A family may also barter yak hair or ready-made tent cloth with another family in urgent need and then get the same back when needed later. Regardless, a tent requires a significant amount of yak hair and is years in the making.

Once the woven cloths are ready, an experienced person with knowledge of dimensions and measurements of tents advises the final assembling process of sewing and stitching the cloths together and attaching the supporting accessories, like the exterior ropes that are used to tie down and stabilize the tent when putting it up. 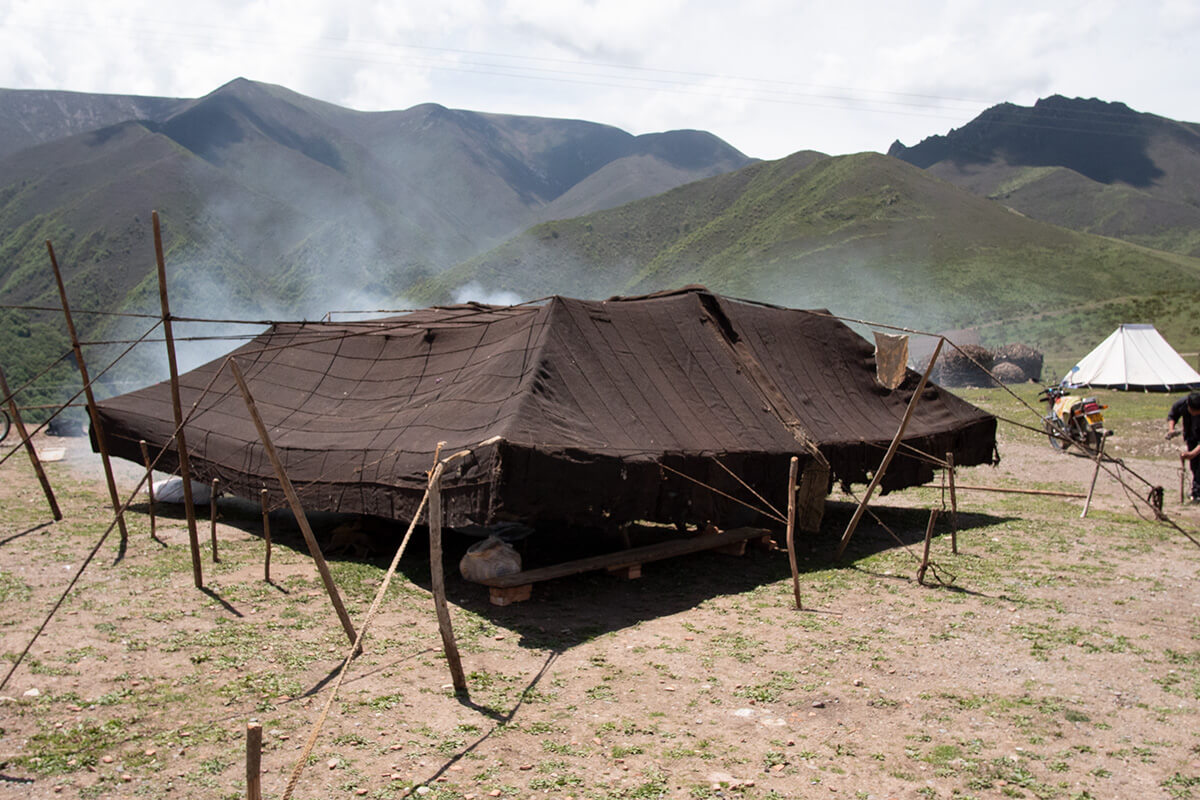 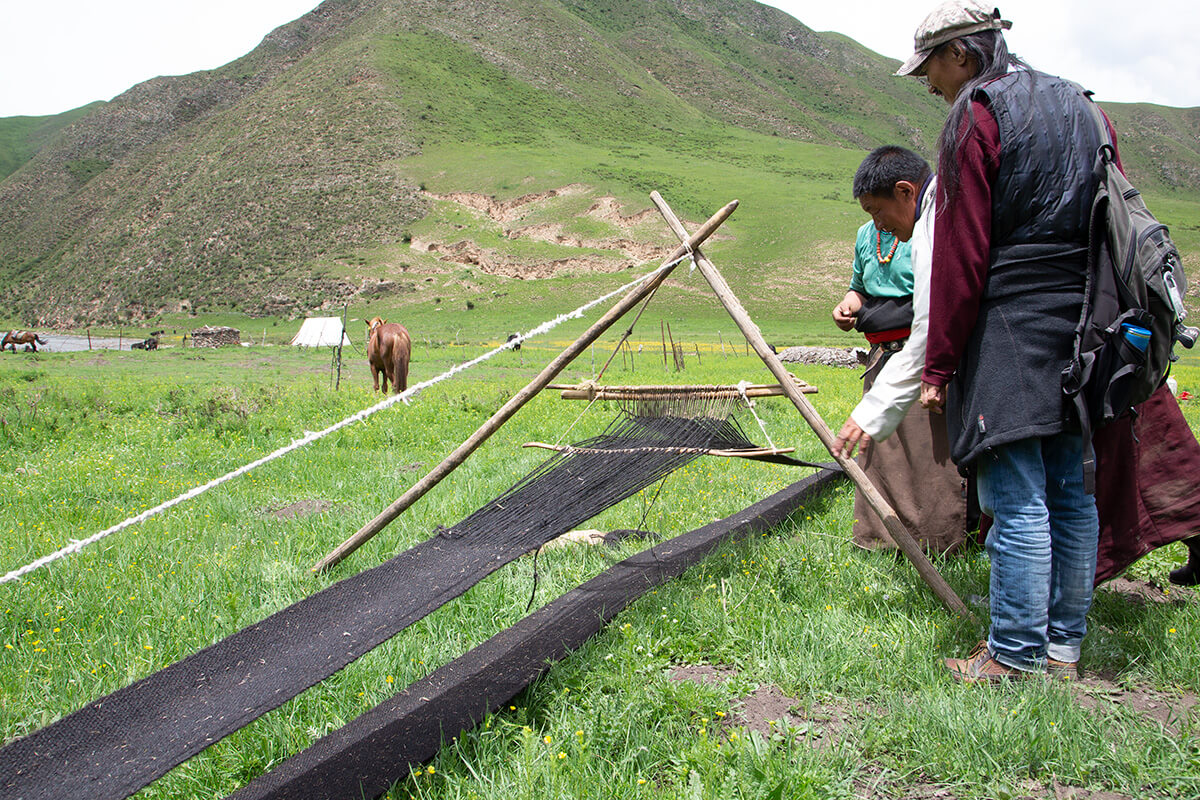 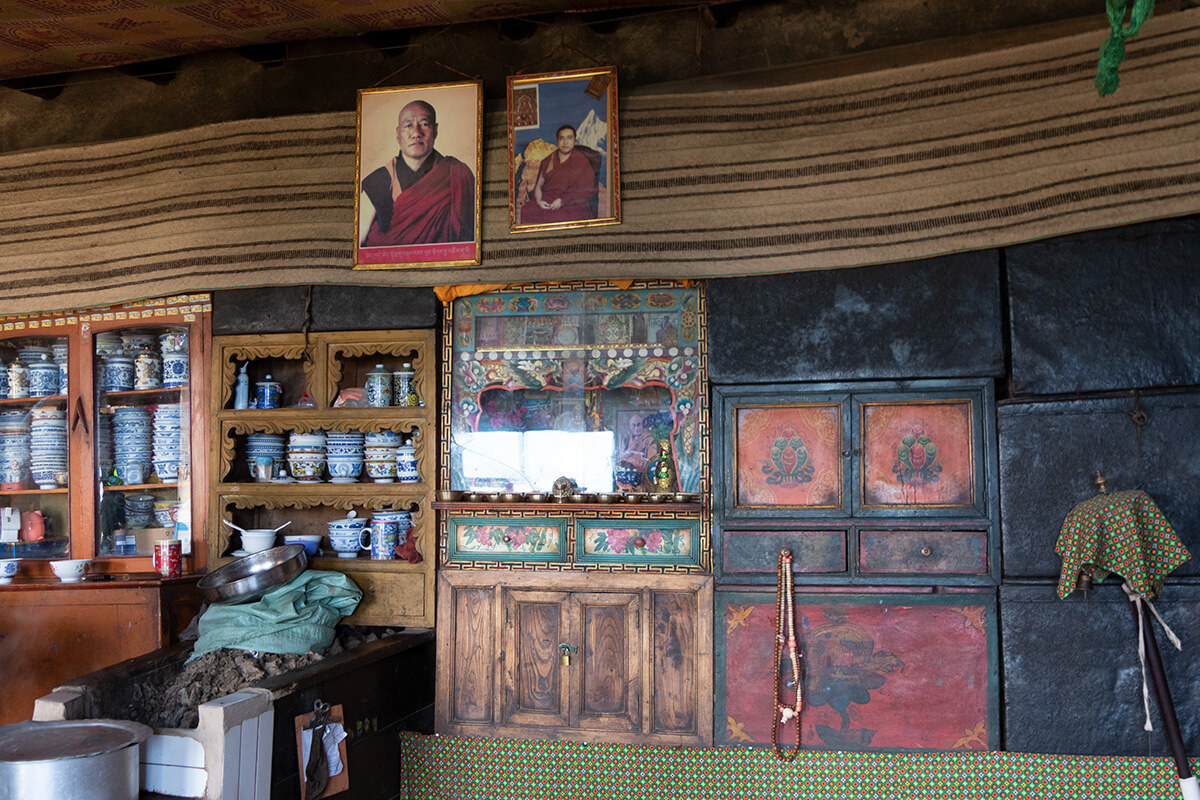 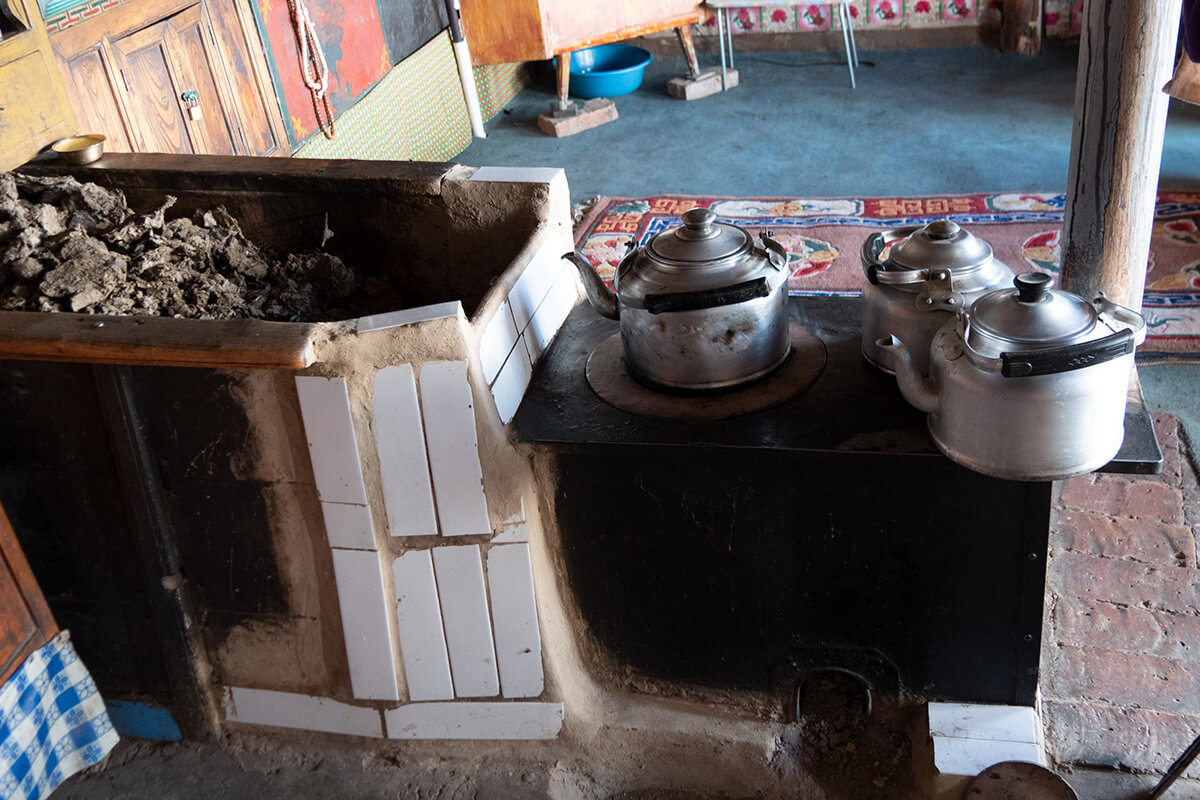 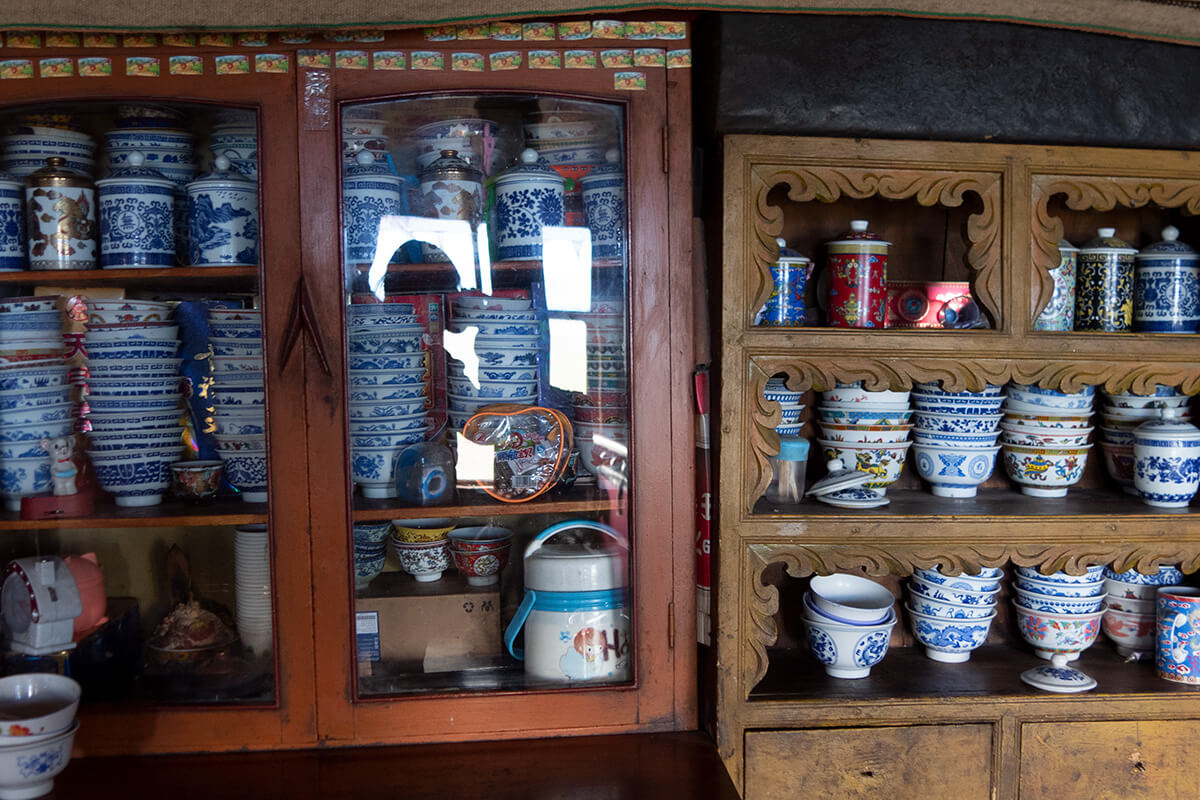 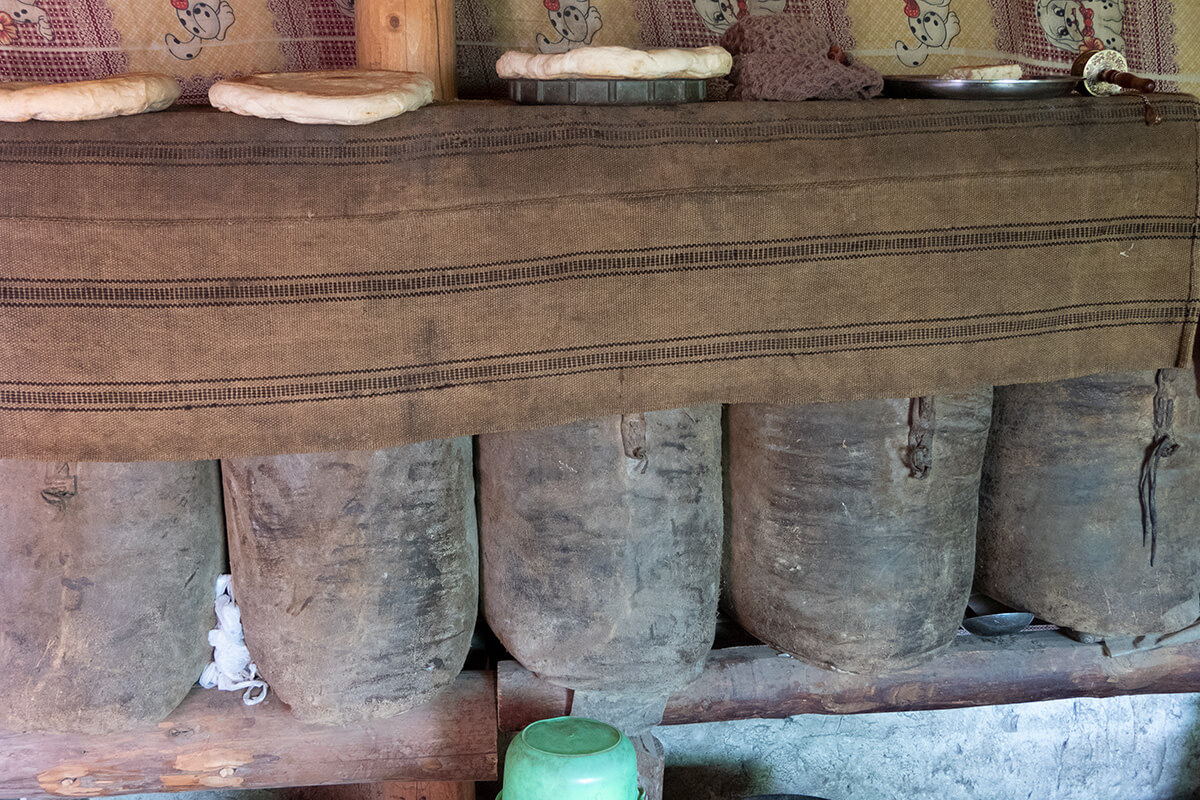 A standard tent has tether ropes holding it down to the ground outside: three on each side, one in the front, and one in the back. Inside, the tent often has three beams going across, each supported by two pillar poles. The middle poles are slightly longer than the others so that rain or melting snow flows off the sides instead of pooling on top and leaking into the tent.

The poles that are furthest from the front of tent are considered sacred, as they are the most interior and intimate; they are closest to other sacred objects, such as the family shrine and religious artifacts. As a result, important religious objects like incense bundles, juniper tree leaves, and other religious offerings are hung on the innermost poles.

The middle poles are sometimes called “warrior’s poles.” Usually objects most associated with male members are hung on those poles. Such objects might include guns or rifles, daggers and swords, horse’s bridles, and so on. The poles closest to the front entrance are associated with female members of the households; therefore, one will often find sewing tools, milking hooks, and cooking utensils hung from and placed near these poles. In some places, the last poles are named “wife’s pole.”

Typically, there are certain seating arrangements inside the tent that follow gender division. For instance, men usually stay on the right side of the tent, divided by the stove in the middle, while women and children line up on the left side. Because cooking is often associated with women, dried yak dung and/or firewood are kept on the left side. Items that are shared, such as food like cheese and butter, or that are sacred, such as the family shrine, are placed across the innermost part of the tent, along the back.

At night, guests or elders and parents sleep on the right side of the stove, while youth sleep on the left. In some instances, parts of the interior tent close to the front entrance may be designated for newborn yak calves.