Nima carefully forms the miniature clay body of the deity. His fingers shape the eyes and mouth and then the tiny hands—down to the fingernails. The deity is completely vulnerable in the hands of its maker and could be crushed if his hand slips. Despite this vulnerability, Nima knows that the life of the bronze deity he is crafting will far surpass his own.

Master Tibetan bronze artist Nima and his son and apprentice, Dawa Dakpa, are the sixth and seventh generations of the Khyentse bronze lineage. The father and son carry on the tradition, crafting exquisite bronze sculptures of Buddhist deities and enlightened beings known as bodhisattvas.

Learning to make a sculpture takes years. At five years old, Nima began working in his uncle’s workshop as an apprentice. He memorized the seated and standing postures of each deity, their hand gestures, and their individual body measurements. He mastered drawing and painting, learned where to harvest clay and how to filter and prepare it. He learned to sculpt clay and wax, to cast and smith bronze. By the time he made his first bronze figure from beginning to end, he was in his twenties. 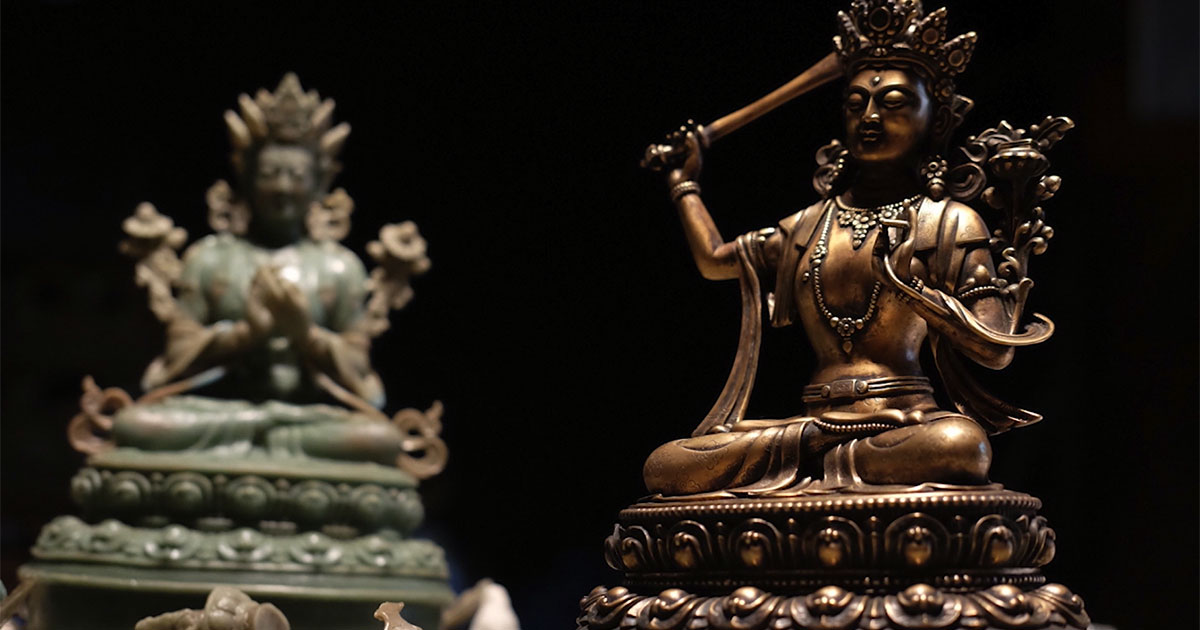 Like his father, Dawa Dakpa began learning at an early age. As a boy, he would draw birds on a slate with stone. During his teenage years, he decided to leave school and devote himself to the family craft. Despite this sacrifice, Dawa Dakpa, now twenty-six, says he does not feel constricted by his family’s legacy. The responsibility does not feel like a burden. He says that this work is meaningful, connecting him to all bearers of this great lineage—his father, his great-uncle, his great-grandfather, as well as the venerable Jamyang Khyentse Wangpo (1820–1892), founder of the non-sectarian Rime movement.

The techniques involved in making bronze sculptures were developed over hundreds of years. As bearers of the tradition, the father and son both contribute to the body of knowledge they have received. Nima says the tradition lives through them as artists. Dawa Dakpa describes innovation as essential to the survival of the Khyentse lineage.

“Mental freedom keeps our work alive,” he says. To him, tradition needs innovation the way fire needs air—tradition and modernity need not be at odds. In fact, the difference itself is a false divide.

In Nima’s tradition, thinking is also an integral part of the making process. In fact, the meditative practice artists cultivate is linked to the quality of the work they produce. Although a sculpture made with a certain mindset, like food made with love, may seem like an impressionistic sentiment about an ultimately imperceptible effort, Nima asserts that a meditative mindset or lack thereof can be seen in the bronze work. The process is as important as the product.

Buddhist practitioners must not think or speak badly of a buddha or bodhisattva, who are inwardly perfected, so the artist must do justice to the physical forms of the deities they are crafting. The beauty of the sculpture must inspire, giving power to the teachings of the deity. Additionally, there is impetus to develop one’s character as well as artistry. If the shadow of the artist lingers on the figure of a sacred deity, it must be worthy of its counterpart. 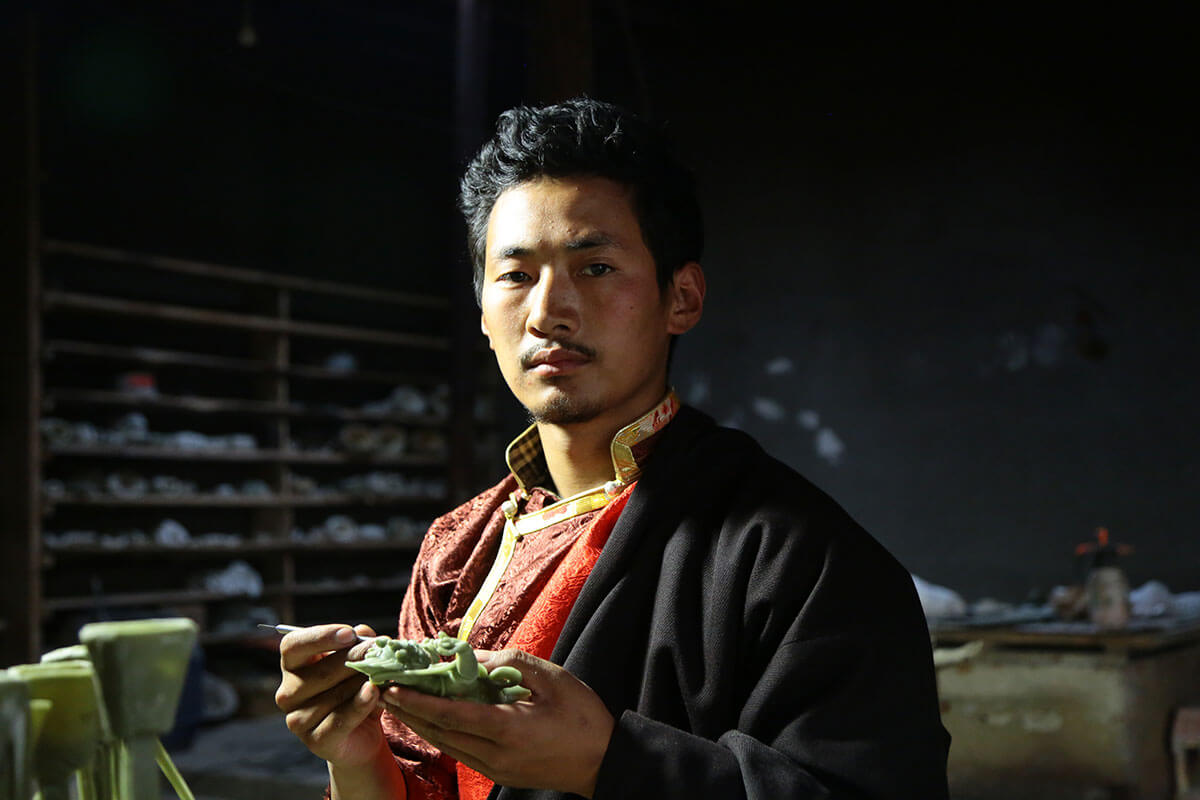 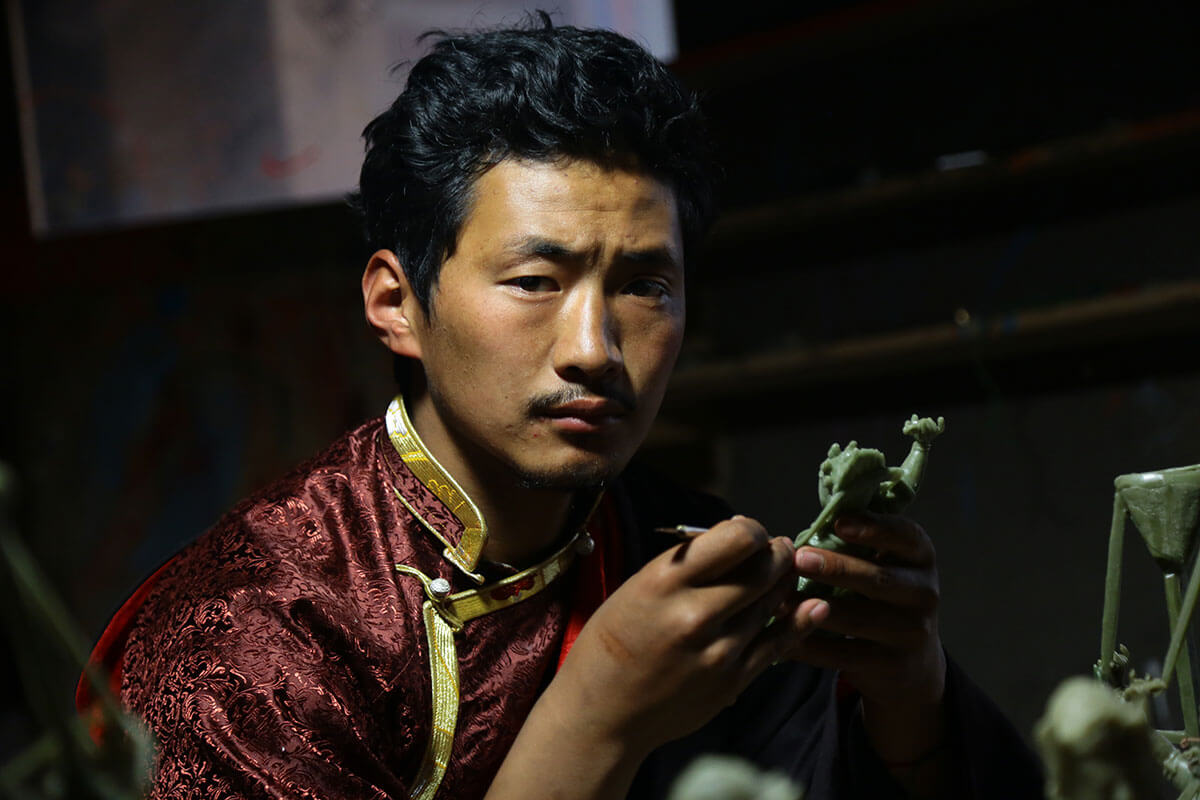 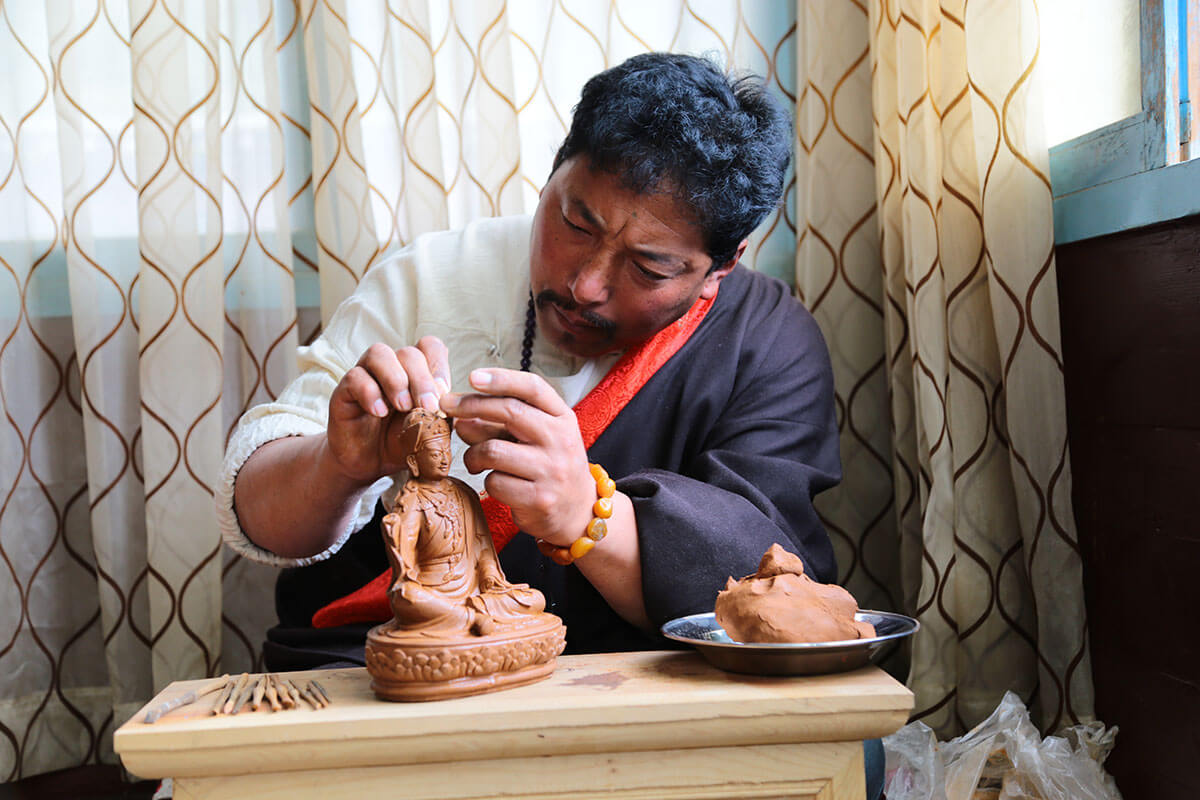 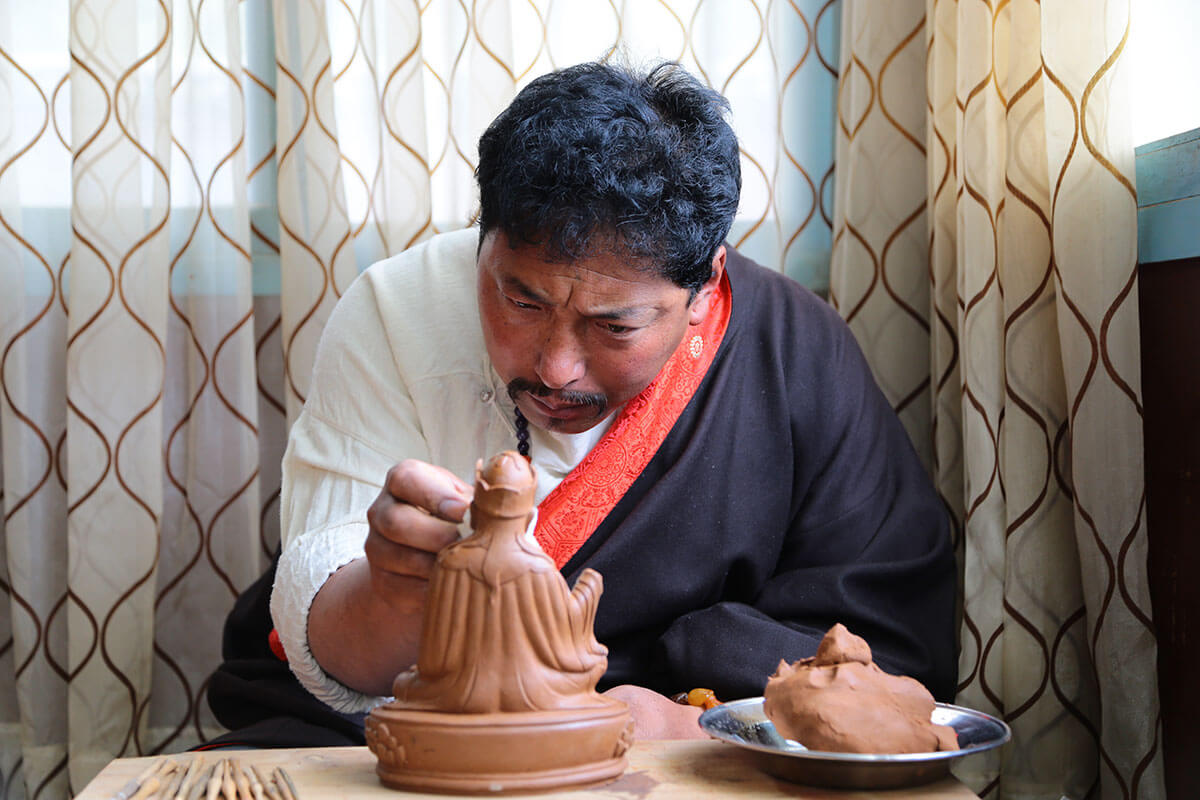 Intense focus is essential to bronze work. Sculptures of Buddhist deities, Nima says, cannot be made without full concentration and good intention. The artist’s mind must be clear—free of distractions. “When you work,” Dawa Dakpa says, “you must think positively and compassionately.” Both artists say that when they work, they escape from the mind’s chatter. Their state of mind, similar to a state of flow, is also meditative in nature.

Nima and Dawa Dakpa’s work is inherently devotional. As Nima works, he reflects on the teachings of the deity he is crafting, chanting mantras under his breath. As Dawa Dakpa works, he contemplates the past, present, and future. For both father and son, meditation is not abstract Buddhist teaching—it is their daily practice.

Nima and Dawa Dakpa are also driven by a strong sense of social responsibility. They know how their craft is connected to larger economic and cultural forces. Dawa Dakpa observes that if they were to scale up or move to the city, the workshop’s absence would put their community at risk. As income instability and climate change transform numerous rural communities on the Tibetan Plateau, traditional livelihoods are becoming increasingly difficult to sustain. Many artisans, farmers, and nomads are forced to abandon their rural ways and search for work in cities.

In Nima and Dawa Dakpa’s community, people engage in many kinds of work. Dzongsar is semi-nomadic: families herd yaks and dzomos (yak-cow hybrids) as well as tend small pieces of land to grow staples like barley, turnips, and potatoes. Many people also harvest and sell caterpillar fungus (also known as cordyceps), a valuable rare fungus that grows on the plateau. But the area is also known for its crafts, home to many potters, silversmiths, and weavers.

Recognizing the economic pressures that local people face as well as the dynamic nature of their work, Nima set out to ensure that they did not replace traditional livelihoods but, rather, supplemented them. Nima established the workshop as a social enterprise called Khyenle. In Tibetan, khyen refers to Jamyang Khyentse Wangpo’s lineage, and le means bronze. Pema Dorje, a wax sculptor in Nima’s workshop, says, “Khyenle means stability and flexibility to me. Work at Khyenle is not seasonal and rigid like farming, herding, or caterpillar fungus harvesting. At Khyenle, I can work year-round and any day of the week.”

The flexible work schedule and stable income allows artisans like Pema Dorji to continue his multiple sources of livelihood and fully maximize his income. Bronze work, though time-intensive, does not have a rigid nine-to-five schedule. Craftsmen can secure a stable income regardless of the season, allowing them to stay in their communities and continue a range of traditional practices. Over the past fifteen years, Nima has taught and employed roughly thirty artisans like Pema Dorji.

In this way, Khyenle sustains so much more than bronze work—the flexibility and stability it provides has a much larger cultural impact. By supporting herding livelihoods, for example, local foodways, craft, and musical traditions can benefit. Women can use dzomo milk to make tea, cheese, and butter, which requires a specially crafted churn. Families may cook and dry yak meat. They can use yak dung as fuel for cooking. They can weave soft hair from the yak’s underbelly into shawls and woolens and course hair from the back into tents. As they work, they sing milking songs, butter-churning songs, and songs that praise the yak. Sustaining the livelihood supports the entire cultural ecosystem.