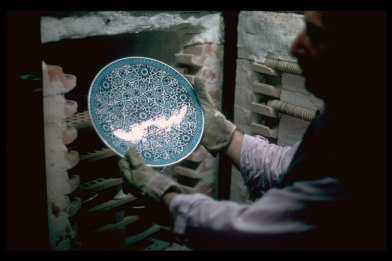 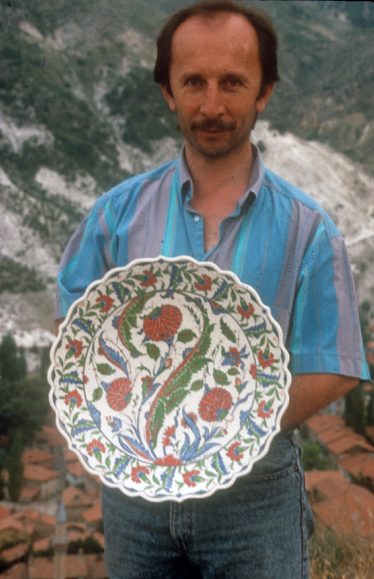 Mehmet Gürsoy came to Kütahya from Denizly, Turkey, in 1960 at the age of ten. Initially working a primary school teacher, Gürsoy’s penchant for art prodded him toward çini. In 1983 he joined İbrahim Erdeyer at Süsler Çini, where he learned the trade from esteemed master İhsan Erdeyer. Gürsoy quickly emerged as an expert designer, devoting eighteen hours daily to the conception and decoration of energetic floral and faunal motifs. Rife with symbolism, Gürsoy’s lush designs, sometimes deliberately organized in ways to resemble a human face, intended in part to signify the idiosyncrasies of human existence.

In 1986 Gürsoy participated in a ceramic competition judged by Ahmet Şahin that earned him a prize of one million lira for his showcase of a plate, vase, and panel of tiles. The following year in collaboration with four other potters he established İznik Çini. Gürsoy was criticized for naming his atelier after the city of Iznik, but asserted that “Iznik” designated artistic excellence in the course of Ottoman pottery, which he sought to recapture in his own work. While initially adhering to the strictures of sixteenth century Iznik, Gursoy prudently experimented with his designs—augmenting the classical palette by developing a new green and coral red—in order to imbue his art with an identifiably modern Kütahya aesthetic that equaled, and eventually surpassed, in artistic merit the old archetypal tradition.

Today Gürsoy is the sole master of İznik Çini after the original partnership dismantled; he continues to work ambitiously and is arguably the most prolific contemporary ceramicist in Küthaya. A learned teacher, he welcomes into the İznik Çini family young talent whose artistic development he constructively and amicably nurtures.

Global in his mindset for worldwide recognition of Kütahya çini, Gürsoy has participated in numerous national and international venues celebrating arts and culture, notably the Smithsonian Folklife Festival in 2002. He was awarded in 2009 the UNESCO Living Human Treasure Prize.