Jay Scott Odell (b. 1935) was born in St. Paul, Minnesota, to Adalberta Lavoie Odell and Jay Geddes Odell. The family moved frequently throughout his childhood, but settled in Mamaroneck, New York, in 1950. There, Odell met poet Peter Kane Dufault, and musician and poet Burt Porter, two figures who would go on to strongly influence his personal and professional development.

Odell attended Middlebury College where he met his future wife, Dorothy “Dottie” Hiebert. They married in 1959, moved to Boston, Massachusetts, and soon became active in the peace movement and the early Folk Revival. The Odells also became involved with the Bread and Puppet Theater group in Glover, Vermont, near Porter’s property.

Odell’s lifelong interest in traditional and regional music had a significant impact on his career. Between 1964 and 1977, when Odell was head of the laboratory at the Smithsonian Institution’s Division of Musical Instruments, he undertook a series of collecting trips throughout the Eastern United States to expand the Division’s collection of traditional American instruments.

Odell retired in 1993, but continued contract work at the Smithsonian, acquiring, caring for, and describing new instrument collections. He has also maintained associations with the Smithsonian Center for Folklife and Cultural Heritage. In 1998, Odell co-produced a recording through Smithsonian Folkways with folklorist Cecelia Conway titled Black Banjo Songsters, which focused on the African American banjo tradition and featured many of the artists with whom Odell had built relationships.

The collection, which dates from 1957-2016, documents the creation and use of folk instruments, and in particular the musicians and instruments of southwest Virginia (Galax), nearby North Carolina (Shelton-Laurel), and the surrounding tri-state vicinity. The collection also contains materials from northeast Vermont. The main focus of the collection is plucked Appalachian dulcimers. Materials include photographs, prints, field notes, trip reports, correspondence and other items relating to the instruments and to folklife and music in general, as well as audio and video recordings and photographic prints of musicians, instrument makers, friends, and neighbors playing instruments purchased by Odell, or instruments similar in sound and construction. Material in the collection also relates to the performance of music and dance at the Smithsonian Institution. Biographical materials concerning Odell and his family, including photographs and correspondence, were later donated in the form of accruals after the collection’s transfer to CFCH. 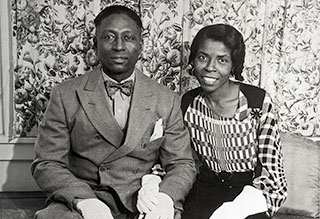 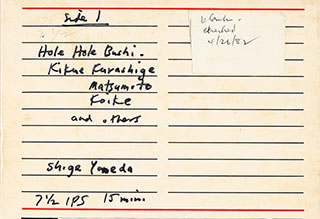