Today, folk traditions are not as common as they once were in rural areas of Central Europe. Yet, the value of folk art has not declined. In fact, in Sütő’s opinion, owning a piece of folk art is a powerful symbol of identity.

“You know, some rich people buy from me because today, it is identity to have in the house traditional Transylvanian furniture. It’s identity, I feel. It is to have a cradle, this red cradle, or corner chest, when you enter in the house is [a symbol of] identity. Americans live different. They buy for aesthetical, not for identity like in traditional European culture. They buy my chest because it’s beautiful with many flowers.” 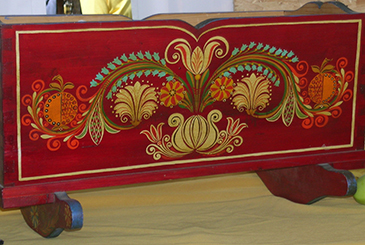 At his crafter’s booth, Sütő displays this traditional red cradle among other hand carved and painted pieces. Photo by Kylie Shryock

One of the most important and symbolic pieces of Hungarian folk furniture is the hewn chest. The tradition of the symbolically significant chest dates to the thirteenth century. Since then, countless varieties and iterations of the chest have emerged with individual regional characteristics. Modern hewn chests are characterized by the medieval motifs of dark outlines and brightly colored interiors. A traditional hewn chest made by Sütő is emblematic of the quality of craftsmanship and tradition inherent in Hungarian folk art.